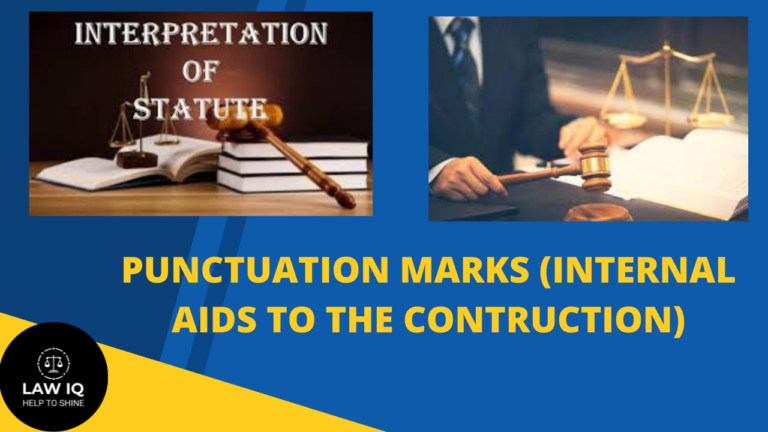 → Here, mainly punctuation are put in the form of Colon, semicolon, comma, full stop, dash, a hyphen, brackets etc way. All these marks are known as Punctuation Marks.

→ In ancient times, the courts were not concerned with looking at punctuation because that times statute were passed without punctuation and they passed naturally.

• So Here, When a matter comes before the courts then there is a need for the interpretation then firstly court look at the provision as they are punctuated but courts feel that there is no ambiguity and no conflict at the time of interpreting the punctuated provision, they shall interpret the provision.

“The system of the using certain conventional marks as periods in writing or printing is the Punctuation Marks.”

↔ Mainly Legislature used the punctuation marks very carefully while construing the provision so that the court easily interpreted the main intention of the provision.

→ Punctuation Marks is the art of dividing sentences by point or mark. In a short way, ‘Punctuation’ means to make points with usual stops.

This Supreme court of India says that
↓
“Punctuation
↓
itself does not control
↓
the meaning of the law where its meaning is clear.’

In this case, the court says that,
↓
It is very doubtful
↓
punctuation can be seen
↓
for
↓
construction purposes”

In this case, the court says that
↓
the punctuation was a small element
↓
↓in the interpretation of the law
↓
especially in the case of secondary law.

In Mohammad Shabbir v. the State of Maharashtra

USE OF PUNCTUATION MARKS

→Mainly Punctuation Marks are used for resolving the ambiguity which arises at the time of the interpretation of the statutes.

→Another thing is that punctuation marks help to interpret the statues.

→ In a short way, the Punctuation mark help to solve the ambiguity which arises.

→ Also stated to the main intention of the legislature for particular provision, for that Punctuation marks used.

Punctuation marks is that which is the art of dividing sentences by point or mark. In a short way, ‘Punctuation’ means to make points with usual stops.

With help of the Punctuation Mark court leads the main intend of the legislature for a particular provision and also resolve the ambiguity while interpreting the provision.