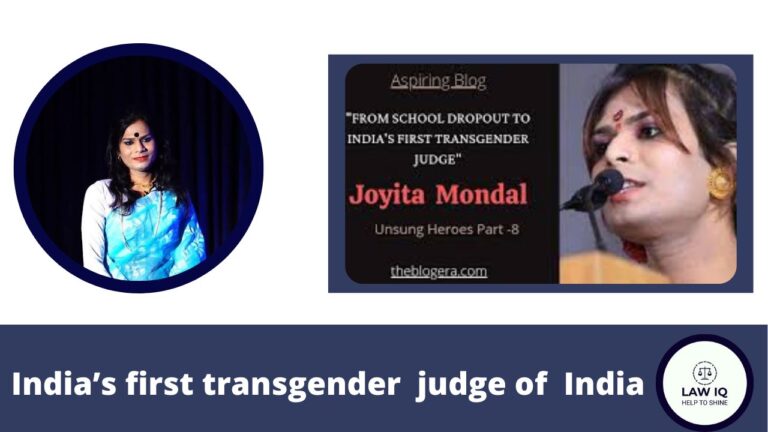 Joyita Mondal was born as Joyonto(male) in Kolkata. his life is full of struggles from earlier times. she used to beg on the streets and after 10th class dropped out of school. Joyita Mondal left home also. Let’s see the whole journey of Joyita Mondal. Joyita Mondal’s story gives motivation and inspiration not only to the transgender community but also give to all lower communities.

Do you want to know more about her extraordinary journey? Read on……

The early life of Joyita Mondal

Joyita Mondal dropped out of school after class 10th and she was once made homeless in her early part of life she was also forced to beg on street. This thing happened just because of the discrimination that she faced in society.

After giving her time to transgender rights she decided to study further and she also achieved her law degree.

After she came to a locality called Islampur in Uttar Dinajpur, Joyita never returned to Kolkata. During the early part of her life in Uttar Dinajpur, she spent her life begging on the streets, sleeping at any place near a bus stand, and spending time attending various functions as a “hijra” – a eunuch.

Later she started working for the rights of transgender and slowly extended her battle for anyone irrespective of their gender who was facing any kind of social discrimination. At the same time, she also completed her studies through a correspondence course and obtained a law degree.

In the year 2010, Joyita Mandal was the first transgender from their community in the Uttar Dinajpur district to get her voter’s ID. Then she established an organization called “Dinajpur Notun Alo Society”, which means new light for reaching out to various transgenders in that area and also others in that region, and helping them. At present, the organization works with almost 2,200 transgenders.

In July 2017, Joyita was finally appointed as the judge of Lok Adalat in Islampur. As a member of a transgender community, she happens to be the first person to have earned this opportunity to enter into the judicial system of India, with the legal power to bring change in society.

Date Of Appointment as a judge In July 2017

Although she has achieved a lot, spending the night at a bus stand or being thrown out of the hotel rooms just because she happens to be a transgender still haunts her memory. She would consider this new appointment as one of the biggest benefits for the transgender community, only if a minimum of 2 to 3% of this transgender community in Islampur can get dignified jobs.

She says that transgenders can be appointed at least as Group-D staff if they do not have enough educational qualifications. Often governments prefer to appoint someone from any weaker communities to suppress the voices of the transgenders and as a judge, she would not allow this to happen.

She said that in the past, most people treated her as an untouchable and often passed abusive comments. However, today people come to her and often request her to mediate in various family discrimination

The judge in the Lok Adalat Dinajpur bench in West Bengal

Though her present appointment in Islampur as a judge gave a lot of hope to her community, she feels her mission will be completed only when she will see transgenders being employed in various government and private sectors. She has not come to Uttar Dinajpur from Kolkata for just her own fight.

Joti Mandal cannot ignore her community due to which she has reached this position. She will therefore request the government to start offering government jobs to transgenders first so that her community can get dignified life. also considers the work of peons, coolies, or other such Group D works a dignified job.

Here the question is, How many Transgender judges are in India?