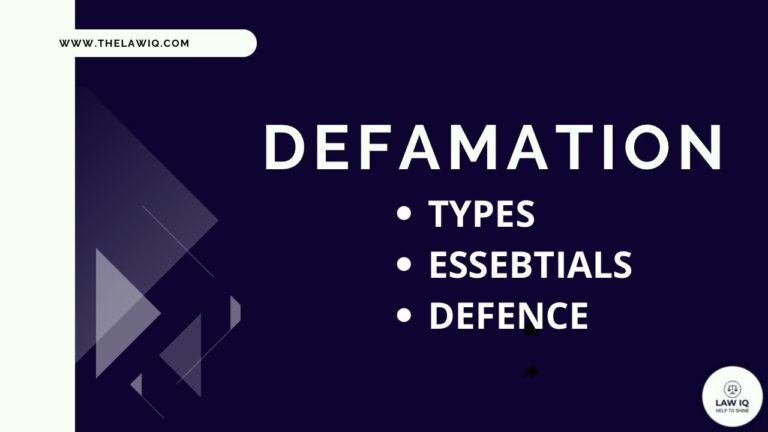 BY:  thelawiq.com    Submitted By:- Mukul Khandelwal

It is rightly said that one’s reputation in society is the most valuable asset of his own. But is there any protection of our reputation from being diminished? The law of defamation works on the principle of protecting one’s valuable reputation from being a shrink. Defamation is simply injury to one’s reputation resulting from a statement spoken or published which is false. Defamation is both a civil and a criminal wrong, which is defined under Section 499 of the Penal Code for criminal defamation and is covered under the law of torts for civil defamation. The punishment, mentioned under section 500, can extend up to simple imprisonment for a term of two years, with a fine, or both.

Mischief to a private individual is the basis of the law of civil defamation; whereas mischief to society leads to criminal defamation.

Wait, this means a person who is deaf and dumb can never act for defaming someone?
→ The answer is no, the deaf and dumb people can also defame someone by their gestures, or mimicry which is supposed to be defamatory.

⇒ Something which is defamatory either written or printed, which is something in permanent form like a cartoon, painting, photograph, etc.

Views of English and Indian law on Libel and Slander:

In Hirabai Jehangir v. Dinshawdulji, the high court of Bombay and Madras held no need to distinguish the libel and slander.

Statement must be Defamatory

⇒ The word defamatory itself says it must be defamatory i.e., to injure the reputation of the other. The definition itself says defamation is a publication of statements that tends to lower a person in the estimation of right-thinking members of society generally or which tends to make them shun or avoid that person.

⇒ In the case of Ram Jethmalani v. Subramaniam Swamy, the defendant used some defamatory statement for the plaintiff which resulted in filing a suit by the plaintiff and held that case as exceeding the privilege and that by itself was held to be evidence of malice. (Reference)

Statement must refer to the Plaintiff

⇒ In this case, the burden of proof is on the plaintiff that the defamatory statement has been referred to him only. It is immaterial that the defendant did not intend to defame the plaintiff.

Statement must be Published

⇒ For defamation to be held, the defamatory statement must be known to a 3rd person other than the one who is defamed. So that defamatory matter must be published unless no civil action for defamation lies. In simple words, the communication to the plaintiff himself is not enough as defamation is an injury to the reputation and reputation does not comprise of his own opinions but others’ opinions.

⇒ In the case of Mahender Ram v. Harnandan Prasad, it was said when a defamatory letter is written in Urdu to the plaintiff and he doesn’t know Urdu, he asks a third person to read it, it is not defamation unless it was proved that at the time of writing letter defendant knew that Urdu was not known to the plaintiff.

⇒Truth is an absolute defense in civil defamation and the defendant will succeed if he proves the statement to be substantially true i.e., the Burden of Proof is on Defendant. Whereas it is an absolute justification for the criminal defamation. Truth is just only if it is made for the public interest.

So, does the same apply to the state also?
→No, truth in any sense is no justification in case of defamation of state called Sedition or speaking ill of one’s religion.

⇒ This defense gives the right to comment and criticize every person without any malicious intention the work of celebrities, athletes as well as those whose career is based on public attention. Any fair opinion in the matter of public interest sometimes acts as a protector even if it’s not true.

⇒  Privilege is divided into Absolute and Qualifies Privilege.

Absolute Privilege: It gives the person an absolute right to make the statement even if it’s defamatory, and liability can never arise on that person. Generally, these people can enjoy absolute privilege:

Qualified Privilege: This defense is available when a person making the statement is a legal, social or moral duty to make it and the listener has an interest in it. Some of the instances where the defense can be availed are:

After doing deep research and analyzing what Defamation is, which is laid in Section 499 of IPC, we have discussed what defamation is defined as in both civil and criminal matters, what are the two types of defamation, what all are the essentials for it and, did some privileges also known as defenses to Defamation.