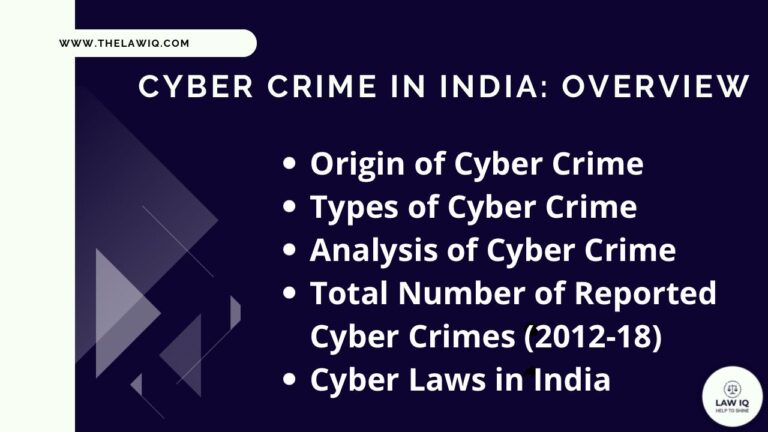 Cyber Crime In India: An Overview

With the increasing use of computers in society, cybercrime has become a major issue. The advancement of technology has made man dependent on internet for all his needs. Internet has given man access to everything while sitting at one place. Social networking, online shopping, online studying, online jobs, every possible things that Man can think of can be done through the medium of internet.

The cyber crime is different from any other crime happening in the society.The reason being, it has no geographical boundaries and the cyber criminals are unknown. It is affecting all the stakeholders from government, business to citizens alike. In India cybercrime is increasing with the increased use of information and communication technology (ICT). Therefore, this article tries to study abrief introduction of cybercrime, different types,Amendments,and analyse the cyber crime happening in India. Further he discusses some steps to overcome cybercrime in India.

What is cybercrime?
→Cybercrime is a broad term that is used to define criminal activity in which computers or computer networks are a tool, a target, or a place of criminal activity and include everything from electronic wracking to denial of service attacks. It is a general term that covers crimes like phishing, Credit card frauds, bank robbery, illegal downloading, industrial espionage, child pornography, kidnapping children via chat rooms, scams, cyber terrorism, creation and or distribution of viruses, spam and so on.

It also covers that traditional crimes in which computers or networks are used to enable the illicit activity. Cyber crime is increasing day by day, nowadays it has become a new fashion to earn money by fraud calls or to take revenge through hacking other accounts.

At the beginning of 1970s, criminal regularly committed crimes via telephone lines. The perpetrators were called Phreakers. Actually, there was no real cybercrime until the 1980s. One person had another persons computer to find, copy or manipulate personal data and information. The first person to be found guilty of cybercrime was Lan Murphy, also known as Captain Zap,and that happened in the year 1981.He had hacked the American telephone company to manipulate its internal clock,so that users could still make free calls at peak times.

Cyber crime can be basically divided into→ three major categories:

Crimes against persons are:

⇒It means to create physical threat that creates fear to use the computer technology such as internet, e-mail, phones, text messages, webcam, websites or videos.

⇒It includes Indecent exposure/ Pornography (basically child pornography), hosting of web site containing these prohibited materials. These obscene matters may cause harm to the mind of the adolescent and tend to deprave or corrupt their mind.

⇒It is an act of imputing any person to lower down the dignity of the person by hacking his mail account and sending some mails with using vulgar language to unknown persons mail account.

⇒It is one of the serious cyber crimes known till date .Cracking means that a stranger hasbroken into your computer systems without your knowledge and consent and has tampered withprecious confidential data and information.

⇒A spoofed e-mail may be said to be one, which misrepresents its origin. It shows itsorigin to be different from which actually it originates.

⇒It means false ATM cards i.e. Debit and Credit cards used by criminals for their monetary benefits through withdrawing money from the victim�s bank account mala-fidely. There is always unauthorized use of ATM cards in this type of cyber crimes.

⇒It means the person who is doing the act of cyber crime i.e. stealing password and data storage has done it with having guilty mind which leads to fraud and cheating.

⇒It involves the use of computer networks to create, distribute, or access materials that sexually exploit underage children.

⇒refers to threatening a person with fear for their lives or lives of their families through the use of a computer network i.e. E-mail, videos or phones.

As there is rapid growth in the international trade where businesses and consumers are increasingly using computers to create, transmit and to store information in the electronic form instead of traditional paper documents.

There are certain offences which affects persons properties which are as follows:

⇒ Intellectual property consists of a bundle of rights. Any unlawful act by which the owner is deprived completely or partially of his rights is an offence. The common form of IPR violation may be said to be software piracy, infringement of copyright, trademark, patents, designs and service mark violation, theft of computer source code, etc.

⇒It means where two persons claim for the same Domain Name either by claiming that they had registered the name first on by right of using it before the other or using something similar to that previously. For example two similar names i.e. www.yahoo.com and www.yaahoo.com.

⇒ Vandalism means deliberately destroying or damaging property of another. Thus cyber vandalism means destroying or damaging the data when a network service is stopped or disrupted. It may include within its purview any kind of physical harm done to the computer of any person. These acts may take the form of the theft of a computer, some part of a computer or a peripheral attached to the computer.

⇒Hacktivism attacks those included Famous Twitter, blogging platform by unauthorized access/control over the computer. Due to the hacking activity there will be loss of data as well as computer. Also research especially indicates that those attacks were not mainly intended for financial gain too and to diminish the reputation of particular person or company.

⇒Viruses are programs that attach themselves to a computer or a file and then circulate themselves to other files and to other computers on a network. They usually affect the data on a computer, either by altering or deleting it. Worm attacks plays major role in affecting the computerize system of the individuals.

⇒ It means to access someones computer without the right authorization of the owner and does not disturb, alter, misuse, or damage data or system by using wireless internet connection.

⇒Basically, Internet time theft comes under hacking. It is the use by an unauthorized person, of the Internet hours paid for by another person. The person who gets access to someone else’s ISP user ID and password, either by hacking or by gaining access to it by illegal means, uses it to access the Internet without the other person’s knowledge. You can identify time theft if your Internet time has to be recharged often, despite infrequent usage.

⇒ There are certain offences done by group of persons intending to threaten the international governments by using internet facilities. It includes:

⇒ Cyber terrorism is a major burning issue in the domestic as well as global concern. The common form of these terrorist attacks on the Internet is by distributed denial of service attacks, hate websites and hate e-mails, attacks on sensitive computer networks etc. Cyber terrorism activities endanger the sovereignty and integrity of the nation.

⇒It refers to politically motivated hacking to damage and spying. It is a form of information warfare sometimes seen as analogous to conventional warfare although this analogy is controversial for both its accuracy and its political motivation.

⇒It means distributing pirated software from one computer to another intending to destroy the data and official records of the government.

⇒ It is very easy to access any information by the terrorists with the aid of internet and to possess that information for political, religious, social, ideological objectives.

Analysis Of Cybercrimes In India:

Total number of cyber crimes reported in India from 2012-2018

⇒ Cyber crimes are anew class of crimes which are increasing day by day due to extensive use of internet these days. To combat the crimes related to internet The Information Technology Act, 2000 was enacted with prime objective to create an enabling environment for commercial use of I.T. The IT Act specifies the acts which have been made punishable. The Indian Penal Code, 1860 has also been amended to take into its purview cyber crimes.

⇒The various offenses related to internet which have been made punishable under the IT Act and the IPC are enumerated below:

Cyber crimes under the IT Act:

Cyber Crimes under the Special Acts:

Never disclose personal information publicly on websites. This is as good as disclosing ones identity to a stranger in public place.
⇓
Always avoid sending any photograph online particularly to strangers and chat friends as there have been incidents of misuse of the photographs.
⇓
Never enter credit card number to any side that is not secured, to prevent its misuse.

We are living in a digital age and cyberspace is not limited to ones boundaries,rather it covers an entire world. As a result cybercrime is increasing day by day in all the countries including India. The biggest challenge relates to cybercrime being its dynamic nature because of the ongoing evolution of digital technology. As a result new cybercrime methods and techniques come into practice. Therefore cybercrime should be given as much importance as other crime happening in our society be it theft, rape, murder etc.