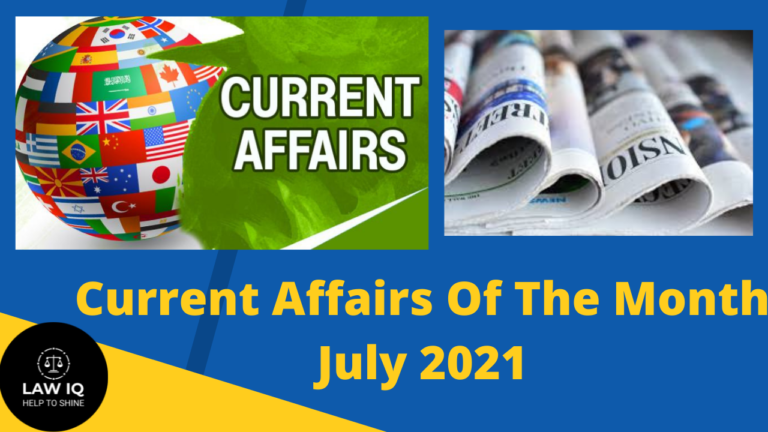 Current affairs of the month July 2021

July month of the Olympics at Tokyo Olympic game organised after the postponement due to the to billionaires recharge and temperatures Travelled to space this fun let’s start the current affair of the month July 2021.

The Cannes Film Festival is one of the most prestigious film festivals globally. It. Previews new films of all, Jean. Including documentaries from all over the world.

→ She has become only the second female director to win this award. India’s Payal, Carpinteria won the award for the best documentary for a night of knowing nothing at the Cannes Film Festival 2020.

In this year’s list are from India, a PCC limited and may have one jar trust are among the ten awardees of the prestigious equator price for their work. In the field of conservation and biodiversity, the ABC limited or oedema light, buzzing good engineer.

Producer Company Limited is a Cooperative Society, run entirely by indigenous people from the Nilgiri, biosphere Reserve in Tamil Nadu, be cooperative Society has improved livelihood across 147 Villages by processing and marketing.

city in Gujarat has been given the tag of UNESCO world,

heritage site dholavira is the Indian, second site to be included in the world heritage list this year.

→ Now, India has 40 units of world heritage sites. The situation in Afghanistan as well as to expand cooperation in the indo-pacific region. On the board.

US Secretary of State, Antony blinken came to India on a two-day visit

on 28. July. Blinken is the third high-ranking official in the Biden Administration to visit. Delhi after the defence, secretary law, in Austin, in March and Special Envoy on climate change. John Kerry in April, Lincoln had socks with the Prime Minister Narendra Modi foreign minister.

Understand the National Security Advisor, Ajit. Doval, Antony blinken strip to India, would strengthen us India, bilateral relations. He discussed the rapidly evolving, security situation in Afghanistan, as well as expanding cooperation in the indo-pacific region under quad,

riots and unrest in South Africa

which continued throughout the month. Widespread riots and looting started. In many cities of South Africa in the second week of July, violence, erupted.

Served as the president from 2009 and was once seen as a Great Hero, he had spent 10 years in prison with Nelson Mandela, but his nine years in power.

Current affairs of the month August 2021