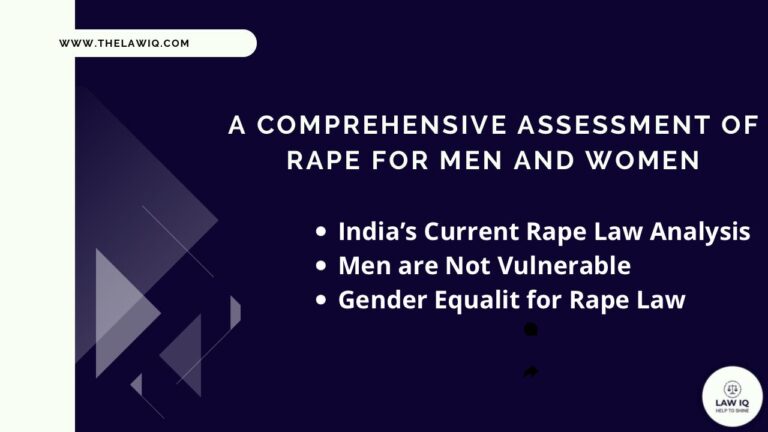 A Comprehensive Assessment of Rape for Men and Women

→In This Post, You Will Learn About A Comprehensive Assessent of Rape for Men and Women so check out this article and share it with others.

⇒ Rape has long been a scourge on civilized society. It has left billions of people damaged, both literally and psychologically. Rape is such a low-level crime that some countries may even use the death sentence to dissuade future criminals from committing similar crimes. However, when looking just at Indian legislation on evolving gender inequality, there is a large grey area.

⇒ Rape is a sort of several assaults that usually involves sexual intercourse or some other form of sexual penetration. Rape is committed without the permission of the victim.

⇒ The rapist will face terrible consequences for his crime. To deter future rapes, the rapist is sentenced to life imprisonment. The victim and the rapist might be either men or women. Rape is not a gender-specific crime, hence the rape victim might be a guy.

⇒ According to Section 375 of IPC,Rape is definedas–

Rape.—A man is said to commit “rape” who, except in the case hereinafter excepted, has sexual intercourse with a woman under circumstances falling under anyofthesixfollowingde•scriptions:—

(Thirdly)—With her consent, when her consent has been obtained by putting her or any person in whom she is interested in fear of death or hurt.

(Fourthly)—With her consent, when the man knows that he is not her husband and that her consent is given because she believes that he is another man to whom she is or believesherselftobelaw•fullymarried

(Fifthly) — With her consent, when, at the time of giving such consent, by reason of unsoundness of mind or intoxication or the administration by him personally or through another of any stupe•fying or unwholesome substance, she is unable to understand the nature and consequences of that to which she gives consent.

(Sixthly) — With or without her consent, when she is under sixteen years of age. Explanation.—Penetration is sufficient to constitute the sexual intercourse necessary for the offence of rape.

(Exception) —Sexual intercourse by a man with his own wife, the wife not being under fifteen years of age, is not rape.] STATE AMENDMENT.

⇒ In India, Rape is female-centric. This led to a perception of the people that most of the crimes in the most heinous form are only committed against women and not men. There are many myths revolving around the concept of rape in India. However, it is not entirely correct as rape crimes are committed against men as well.

⇒ While the IPC in a way identifies rape committed by men ( S\377) it still doesn’t identify rapes that may be committed by women against men. Perhaps, it is the requirement of the changing time and the legislation should straight up make laws protecting men. It needs to be made sure that in case such male favouring law against rape is formed those are not misused in a way.

MEN ARE NOT VULNERABLE :

⇒ In male-dominated societies such as India and Pakistan. Men are regarded as the strongest of all species, thus they are not permitted to do anything that contradicts their manliness, even publicly crying. This societal idea that men are the strongest among human beings implies that men cannot be raped or even prone to it. Women can only be raped in this society, they believe.

on March 2000, India’s 172nd law commission proposed that rape laws be changed to gender-neutral to protect male victims as well. The basic idea is the assumption that rape will be desexualised and the shame associated with it will fade away.

In July 2019, KTS Tulsi, a senior lawyer and parliamentarian in the Rajya Sabha also brought a gender-neutral bill ( Criminal law amendment bill 2019) before parliament to make the rape law gender-neutral in India.

The bill’s main goal is to propose modifications to IPC, the CrPc and the Evidence Act to replace gender-specific terminology like “ any man” and “ any women” in S\354(A), 354(B), 354(C), 354(D), 375 and 376 of the IPC with gender-neutral terms like “ any person”. All gender, including women, men, and transgender people would be protected.

⇒ Over time, we have seen how criminal laws in India have been amended by legislators to satisfy the needs of society. Over time, the amendment has evolved into a valuable tool for meeting current needs.

⇒ As you can see, in The Nirbhaya case, reform to the law relating to sexual offences against women has made a significant contribution to women’s protection. It recognises specific acts that were previously not considered crimes, allowing any woman victim to seek justice.

⇒ However, the bill solely applies to women. The necessity for gender-neutral rape laws has become a pressing issue.

⇒ When both the victim and the perpetrator are male or female, there is a legal gap in this section, even the Supreme Court dismisses petitions calling for gender-neutral rape laws, arguing that legislation will address the matter. Due to a lack of gender-neutral regulation, the majority of crimes go unreported or the criminal receives a light sentence.

⇒ Even the majority of feminist organisations are opposed to gender-neutral legislation. Putting everything into perspective, the criminal law (amendment) bill, 2014, tries to make such progress when it calls for a gender-neutral section punishing any type of sexual abuse.